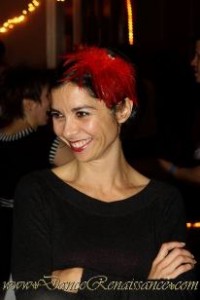 6:30PM (55min) – Fun steps and patterns for packed floors | SWING WORKSHOP (Adv Basics and up)
Location: Auditorium L2
Description:This workshop has something for everyone. Here you’ll learn fun steps and creative variations to do when the dance floor gets a little too crowded and you don’t want to rely on Balboa.
Instructors: Nathalie Gomes Adams

7:30PM (55min) Creating Contrast in your Lindy Hop | LINDY HOP  Level: Int +
Location: 4th Floor
Contrast makes Lindy Hop more interesting. It can be created through footwork, changes in movement speed, changes of levels and more. After this workshop, you will have several tools and skills to add texture to your dancing.
Instructor: Nathalie Gomes Adams

7:45PM (30 min) BEGINNER SWING | Level: Beginner Open
Location: Auditorium L2
This class is great if you’re new to swing or if you would like a refresher on partnering. You’ll learn techniques that will bring you up to speed with the crowd of swing dancers. This class is FREE with your General Admission ticket.
Instructor: TBA

Born in France, Nathalie is a World Swing Dance Champion and has multiple wins in all the major U.S. swing dance championships. Known for her gravity-defying aerials, Nathalie has taught and performed in more than 23 countries. Her vibrant performances have resulted in notable stage, film, and television appearances. She performed and served as an aerial consultant in the original Broadway production of “Swing!”, and has appeared at Carnegie Hall and Lincoln Center. She was a featured dancer in the 2003 Julia Roberts film Mona Lisa Smile and was a model for the dancing elves in Robert Zemeckis’ 2004 animated feature The Polar Express with Tom Hanks. Her national television appearances include repeat engagements on The Today Show, as well as Entertainment Tonight, The View, So You Think You Can Dance, Good Morning America, and on MTV.

Nathalie’s other notable credits include choreography and performances for Will Smith ‘s Willennium CD-release party on Times Square, and a performance for President Bill Clinton at America’s Millennium New Year’s Eve Party, produced by Quincy Jones and Stephen Spielberg. Nathalie frequently teaches, choreographs and performs for corporate functions. Some of Her past clients include British Airways, Sony, Samsung, Biore, the New York Knicks, and Seagrams.

Although her performances are awe-inspiring, Nathalie’s true love is teaching and coaching.While living in NYC for 11 years, she founded and managed Hop Swing & A Jump, a dance studio that was entirely dedicated to the swing dance area and all of its dance forms. Her heart took her to New Orleans in 2005 where she founded multiple dance related programs and venues: Dance Quarter, NOLA Spaces, Les ReBelles NOLA and MindSteppers where more than 700 children learn how to dance weekly!